If you are a man who has experienced childhood sexual abuse, know that you are not alone. 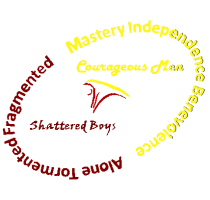 Sexual abuse of anyone is atrocious. Sexual abuse on a child has a far greater impact on the child, producing lifelong effects, due to the child not having developed a self-identity; literally stopping the growth in the area of the abuse (trauma), until the trauma has been resolved. With males the trauma is further aggravated due to society’s refusal to believe boys who have been sexually abused, only to ostracize and stigmatize.  All the while the boy is growing into an adult and constantly having to endure the trauma until enough courage can be mustered to begin the journey of recovery, this often takes decades, if ever.  These men, who find the fortitude to endure childhood sexual abuse and live, are Courageous Men. Merle Yost, Licensed Marriage & Family Therapist, delivers an informative presentation on male childhood sexual abuse in Because You Care. On April 5th, 2018 the nonprofit organization 1in6 and NO MORE released a powerful public service announcement recognizing men as survivors of sexual abuse and assault; Survivors of Sexual Abuse and Assault Reveal an Important Truth.
Subscribe
1 Comment
Oldest
Newest Most Voted
Inline Feedbacks
View all comments

Thank you for the links to my site. I get lots of questions for guys around the world. I hope you find the information helpful. Merle